85.4  The Singer Special Edition sewing machine is also known as the Singer 90S or the 90S Special Edition.  It is an easy-to-use machine with over 200 built-in stitches, an LCD screen and a simple control panel.  You can also make basic monograms with the 90S.  However, some owners feel the manual is poor and doesn’t provide enough information about the many features.  The unit is also made with quite a bit of plastic (former Singer owners say their older Singer machines were more solid and made with much more metal).

Consumer Ratings
We found 136 consumer ratings on 3 websites and they are provided in the table below.  These generate an average score of 85.4 out of a possible 100 (or about 4.3 stars out of 5).  This is a fairly good score but we’ve seen both higher and lower rated Singer sewing machines.  You can check out our sewing machine ratings table if you wish – it provides scores for all the machines we have reviewed.

There are a number of comments from owners that the Singer Special Edition is a fairly lightweight sewing machine.  Some folks even say they would consider using it to take to sewing classes.  However, we have noticed that this lack of heft has resulted in some comments indicating the unit is a bit flimsy.  Frankly speaking, it probably depends on what you are used to.  Many owners compare the Singer Special Edition to their old Singer machine (from 20+ years ago) and indeed the older machines have much more metal and much less plastic in their construction.

Despite the light weight, is should also be noted that many owners who compare their old Singer to this newer model are often quite pleased with the Singer Special Edition’s performance and ease of use.   As highlighted in the “Cons” above, there is a multitude of comments indicating that the manual is hard to follow and that it leaves out many things (you can check it out at the bottom of this review).  As a result, some owners report being frustrated and not knowing how to get some of the machine’s options/features to work.  Several have resorted to YouTube to try and find helpful “how to” videos.

Following is a video reported as being useful when trying to learn to thread the machine.

Additional insights from owners include the following:

- You can make simple monograms and the machine has the ability to embroider uppercase block letters, numbers and punctuation.
- Singer customer service can be slow should you need it.  (Note: This is not the first time we have heard this and Singer customer service is often highlighted as an issue when we are reviewing other Singer sewing machines).
- Many folks report replacing their old singer unit with this one and being quite pleased.
- There are many comments from new sewists that the machine is easy to use.
- Some owners indicate that their children, even under age 10, like it and are able to use it.

You can read more Singer 90S customer reviews on Amazon if you wish.

The Special Edition carries a 25 year warranty.  One should note however that this “25 year” warranty breaks down as follows:
- 25 years on the sewing machine head
- 5 years on the motor, light assembly, wiring, switches, speed control and electronic components
- 1 year on adjustments, belts, rings, bulbs ad attachments.

The unit weighs about 19 lbs.  You will often see the weight of this machine quoted as 24 lbs but that is shipping weight (in the box). 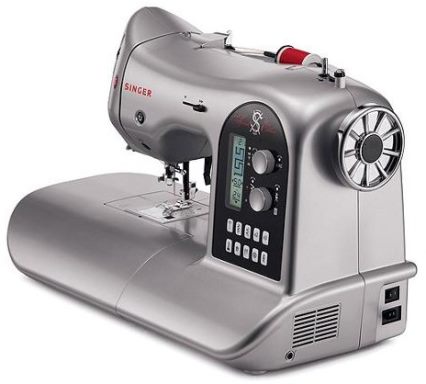 See our Sewing Machine Ratings Table!  It provides sewing machine ratings from our reviews all in one place...

Kick-start your purchase by reading our helpful Guide to Sewing Machine Buying.

Hello!  My name is Alison and I started Sewing Machine Ratings over 10 years ago. Since then I’ve reviewed scores of sewing machines. Sewing has been a hobby for me since I was a young and I love to make my own clothing.
My website should help you find the best machine for your sewing needs. In addition to reviews, I gather owner ratings for each machine and calculate a score. So you can quickly compare one machine to another and also see how others feel about their sewing machine before you buy.
Related Items
Amazon Affiliate

Sewing-machine-ratings.com is a participant in the Amazon Services LLC Associates Program, an affiliate advertising program designed to provide a means for sites to earn advertising fees by advertising and linking to amazon.com. As an Amazon Associate I earn from qualifying purchases.