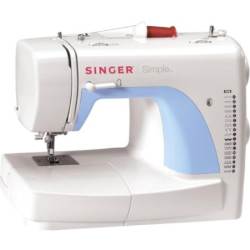 70.1  The Singer 3116 Simple is easy to use and it is not too expensive, however it has some issues.  Owners complain that it is difficult to set the tension and that there is frequent thread jamming.  Also, there are quite a few comments alluding to poor quality construction.  Having said that, it is not the lowest rated Singer we have investigated and there are owners that really do like it.  The 3116 has 18 built-in stitches and is fairly basic but it comes with a few bells and whistles.

Consumer Ratings
We have found over 300 owner ratings for the Singer 3116 Simple and they are provided in the table below.   The average rating for the sewing machine is 70.1 out of 100 (about 3.5 stars out of 5).  Compared to other machines weve reviewed on the site this is rather low.  As a matter of fact if you are keen on a Singer sewing machine (that is still reasonably priced) we would probably steer you towards a higher rated model  consider the Singer 7258 Stylist or the Singer Fashion Mate 7256.

Consumer Insights
Owner comments often yield nuggets of information about a particular product and weve looked at many comments about this sewing machine.  Recurring likes and dislikes are shown in the pros/cons list below:

This sewing machine has a few bugs but it does work.  Some owners feel the problems are too difficult to deal with while others simply label the machine as temperamental.  But there are many comments alluding to breaking and jamming thread, difficulty in setting the tension, odd noises, a problematic reverse lever, and a dim light.  But when the machine works it does seem to sew fairly well and the stitching is smooth and even.  It is also quite basic and easy to work with.

We also found one owner who points out how she has solved the thread jamming/breaking problems.  You can read her review and solutions on Amazon here.

You can see the 18 built-in stitches in the image below.

An instructional dvd is included with the sewing machine and owners have indicated that it is fairly good, as is the instruction manual.  We have read that some folks who purchased the 3116 did not get the dvd however.  Four presser feet come with the 3116 (zigzag foot, button sewing foot, buttonhole foot, zipper foot).  There are also several additional accessories such as a seam ripper, lint brush, foot pedal, seam guide, spool cap, bobbins, needles, a screwdriver and a power cord.  The machine weighs 15.5 lbs.

Video
The following video is an advertisement but it shows sewing machine features and is worth a look.

See our Sewing Machine Ratings Table!  It provides sewing machine ratings from our reviews all in one place...

Kick-start your purchase by reading our helpful Guide to Sewing Machine Buying.

Hello!  My name is Alison and I started Sewing Machine Ratings over 10 years ago. Since then I’ve reviewed scores of sewing machines. Sewing has been a hobby for me since I was a young and I love to make my own clothing.
My website should help you find the best machine for your sewing needs. In addition to reviews, I gather owner ratings for each machine and calculate a score. So you can quickly compare one machine to another and also see how others feel about their sewing machine before you buy.
Related Items
Amazon Affiliate

Sewing-machine-ratings.com is a participant in the Amazon Services LLC Associates Program, an affiliate advertising program designed to provide a means for sites to earn advertising fees by advertising and linking to amazon.com. As an Amazon Associate I earn from qualifying purchases.